The bags were not completely packed, but everything was now ready to be put into the trolly.
The last day with my parents and my sister was partly spent in a climbing park and ended at a restaurant.
My sister and I decided some days ago to go climbing, but after some complications we finally had to move it to Sunday, even if it were raining when we left. The rain showed to be an advantage for us, since the climbing park was completely empty when we arrived and stayed this way the rest of the time. The climbing course itself wasn’t that fun and a bit too short. But they also had a climbing wall and that was very fun to try, as you may see from the picture below. The normal steps were easy, but we had the opportunity to learn to secure each other by keeping the rope on tension and the paths were long enough to get acid in your arms. Some weeks ago I tried bouldering but had to give up after a few minutes because my fingers are too weak and since then I have been training them and the climbing wall was just an optimal way to train. I have found out that there is a climbing wall close to the campus in Daejong so I know what I will be doing in my spare time 😉
After 2 hours we left the climbing park with a smile. 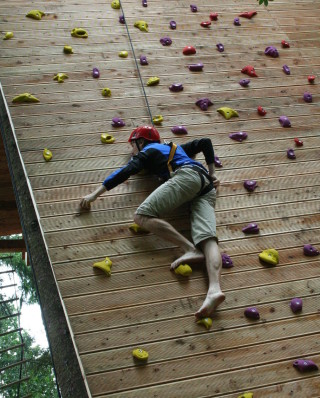