Today, a quite relative term if you’re travelling across time zones, was the day to leave the well known environment and begin on all the new experiences. Flying, not completely new but still exciting, since it’s not that often I sit on a plane after all. Leaving the EU through an automated control, where you scan your passport and then get photographed. My glasses were distracting the system and we had to negotiate for quite some time: The system trying to change the lighting conditions and me trying to find the right head position.

The flights were manageable and the time passed quite fast. I tried to sleep most of the time and was chatting with the woman next to me, a German-teacher at one of the universities in Seoul. And after 10 hours in the air, we started to approach Incheon. Below us were some small rocks in the water and the closer we came the bigger they got, becoming bigger rocks and finally small islands and then we landed. The building we arrived at were separated from the rest of the airport such that we had to take an underground train to get there and here it became clear what is meant by “Koreans are always in a hurry”. One thing was that everybody was running toward the train because an official was waving at us, but the other thing was that people were running too when leaving the train, even if the chance was very little that our baggage had already arrived at the pick-up. Back in Hamburg, when I was checking in my bag my mother insisted on putting a little band onto one of the handles to make it easier to identify it and it turned out that that was a good idea, because bags look very much the same when you’re searching for a “big, blue bag”!

But it finally fell on the conveyor belt and the customs officers had no comments after checking my bag. Now my adventure started.

First I had to get to Seoul but the ticket machines don’t take visa-cards and I hence had to get money first. That was easy enough and with 50.000 Korean Won (KRW) in my purse I finally got the ticket to Hongik University. The train ride took some 30-40 minutes were I tried to look out of the window without starring at the people on the opposite side and trying to read the news on the TV screens. That was quite discouraging. After 3/4 year of studying Korean I had hoped to be able to read more than just discovering a single word in every 3-4 lines. But that’s just how it is. At least the people which I needed to talk to to get to the hostel were all speaking English.

The woman on the airplane had warned me that it is hot and the humidity high in Seoul these days and I new what that meant when coming up to the ground at Hongik station. It was overwhelming! A lot of traffic and the same feeling that you have when opening an oven and sticking your head into it, just without the smell of bread but a lot of pollution instead. Welcome to a mega-city!

Finding the hostel was easy and after checking in I started my trip through the city. My first stop was the city hall. I actually had no plan where I was in the city but decided that it should be possible to just walk around and then find a subway station, which will always be able to bring me back to Hongik st.

I actually ended up at the very center of the city with the statue of “Sejong the Great”, the founder of the Korean alphabet, Hangul. I actually forgot my mobile phone, so I didn’t take pictures, but it’s a favourite tourist attraction, so you can find lot of pictures on the internet 😉

Because of the baking sun I decided to find a cooler place, and what is more cooling than a place in the shadow at a stream. And such a stream runs through the city center. At first lively with small water falls, and later more slowly. There are a lot of bridges over the stream and under each bridge you find a lot of people with their feet in the water, as you can see from the pictures below. I also found a place and let the water call me.

But I can’t remember much of the joy, because that was also the time where I was hit by the lack of sleep from the flight, where I didn’t sleep more than 2 hours. The rest of the day was blurred by this great urge to just close my eyes. But I successfully fought and went through the small streets with A LOT of small shops. Interestingly these shops sell almost the same. You have streets with shops only selling sewing machines on the left and shops selling fabric and yarn. Again another street sells only rubber band and materials containing rubber bands. But all these shops tell the story of a society which still is under development. The shops are very basic and small and operated by one or two persons and products and waste are floating everywhere, sometimes making it hard what is what.

But then again you see lots of new and higher priced cars which give rise to another business: parking facilities. They are everywhere! Another thing that is everywhere and is what the bike is in Copenhagen: roller scooters! They are used for everything and they drive everywhere and carrying everything from only the driver to meter-high stacks of carpets.

After a short walk on a gigantic food market, I went back to the hostel and tried to get some food (which would fill another page, so I skip it for now). I ended up eating Spaghetti Carbonara, because i couldn’t find an open shop with Korean food. I guess I searched the wrong place…

I finally went to sleep and slept for 13 hours with a few interruptions to turn on and off the air conditioner. 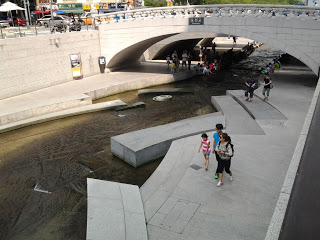 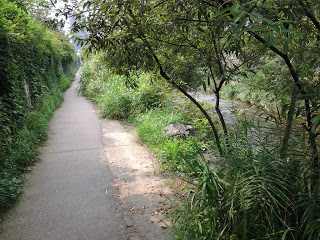