A new spinning training and more experiences with exercising. The heart rate is a central measure for exercise control, also on “bruttotruppen”, the Danish Inline Speed Skating national team (for lack of a better description. It’s the group in which the candidates for the national team train). We did train 45 minutes pace line and sprints every 5 minutes and wore heart rate monitors which the national coach could monitor on a tablet. My trace is below. I had a similar baseline as the other (better) skaters, but my peaks are  much less expressed than those of the other skaters, which had very sharp peaks. This can probably be attributed to a lack of strength and technique.

If the spinning training last week was disappointing the training today was it even more. The graph below shows the trace from today and the trace from last week, as the trace last week turned out to be fairly close to the desired program.
I had a nicer warm-up today, but I also felt that the warmup was tiring and when moving from the warmup to the first part of the training, where we gradually increased from 80% to 88%, I had to realize that I couldn’t control my heart rate. As the graph shows, I follow the training nicely to the point where we move up to 86%. The first time we were supposed to hit 86% was a peak and after that peak I decreased the intensity too much and my heart rate fell to 82% and I couldn’t push it up anymore, mostly because I couldn’t take the pain.
The next peak (~2 minutes later) was supposed to be at 88% but I couldn’t get  above 85% and couldn’t handle the pain it was to be even at 85%, resulting in the drop directly after down to 77%. At that point I decided to keep the intensity at a level where I would at least be able to do the sprints. For the rest of the training I kept my heart rate in the comfortable zone and then did the sprints at as high intensity as possible. After each sprint I took a break to regain control for the next sprint. The time between the sprints was exactly long enough for me to regain enough confidence to do a proper max-sprint.
The fact that I wasn’t even close to the programs target heart rates and the training still being painful was very frustrating. I can think of 3 possible conclusions:
1. I’m really bad at pushing myself and handling pain
2. Lack of restitution can have a huge impact
3. Maximum heart rate is set too high

What do you think? 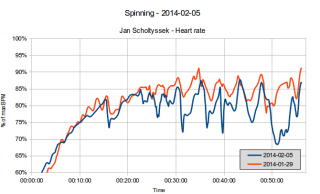