This weeks spinning training was disappointing. I had a hard time controlling my heart rate when cycling in single step (one step per beat). I experienced a few jumps in my heart rate when standing up or sitting back down, where my heart rate would drop by 10-20 beats which I attribute to measurement errors, but on the other site this artifact was repeated reliably. During spinning I was wondering if that could be linked to a great tension in my legs, which would be released during position changes. Much of the training was in single step and when sitting I had to put awfully much resistance on the bike and even then I could not keep my heart rate in the target zone (I believe this is visible as drops marked with arrows on the graph below). With the resistance at the limit where I would no longer keep track with the beat I could only keep the heart rate at around 86% when I was supposed to keep it at 88%. It was easier when standing up, even if I still found it hard to hit the target heart rate. I had to pay the toll for the great resistance by not being able to keep my legs moving fast enough in the second last sprint at the end of the training, visible by not peaking. For the very last sprint I decreased the resistance dramatically and compensated with a high cadence.

When I compared my graph with the intended program I was surprised to see that at least was close, even if it didn’t feel like that during training. But from the comparison below it’s also visible that I didn’t managed to get the heart rate into the max-zone very often. All in all not very satisfying. 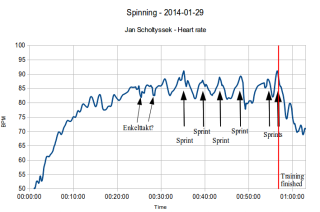 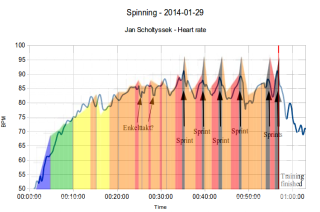