My third day was just as hot and sweaty as the days before and the rain which was promised didn’t come.

– The electronics-mall, according to the description “overwhelming big”
– Lotte-World
– One of the parks at the Hangang river
– The World Cup Stadium

I had hoped for lower temperatures not the least because I’m running out of shirts, which all are soaked and have white salt marks after a day in the heat. But it was just equally hot as the days before and I was already half soaked when I arrived at the subway station. I have been feeling bad in crowds since I arrived here because the saying is that Koreans are quite sensitive to body odour because they don’t have one themselves since 70% of the population lacks the apocrine glands and the rest has only few of them. I can’t smell myself (which I usually can when I’ve been nervous or after training), but just the fact that I might be smelling and that it might be uncomfortable for my surrounding makes me very nervous and conscious where I’m standing and sitting. Together with this focus comes the over-interpretation of peoples reaction. It’s a bad start to get in contact with people…
With the subway I went to my first destination, the electronics mall. I didn’t take pictures to not make any of the people sitting in the shops make uncomfortable, but more than half of the shops were empty and the rest filled with boxes and only a few shops really offered something, the others were just techical supporters/retailers for their specific brands. I was also the only person in the mall except for the staff, so the mall is pretty much “dead”. Then I continued my journey. This time I went over the Hangang river (which runs through the city) and passed below the infamous district “Gangnam” and stopped in Jamsil to visit the Lotte World.
Lotte is one of the big players in the Korean economy (citation needed) together with Samsung, Hyundai, LG and some others. They are just everywhere. The Lotte World is a combination of a giant shopping mall with an indoor… 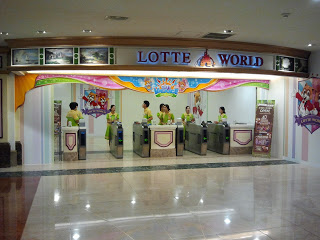 …and outdoor theme park, the Korean version of Disney Land and clearly inspired (or maybe connected?) to it:

I tried to find some tea which I had promised to bring with me from Korea but couldn’t find it. The shopping mall is just what you know from a large European or American mall with the same shops like Prada, Gucci,Dickens, Toys’R’us and many others. The prices were high but the mall nonetheless very popular.

I then returned to the north side of the river to go to the river park near Inchon. On my way I found this: 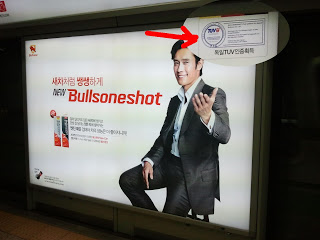 Germany seems still to be a quality brand, at least there are quite a few things with a German touch here. Best known, just as in Denmark and other countries is the “Oktoberfest” and everything related from the traditional dresses to Weissbier and Weisswurst. A very popular name for pubs is also “Hof” or in Korean: “호프“.
My new favourite word, related to this, is now “Weissbier-Hell” for a bar with pictures from the Oktoberfest on the outside.

Without a good map I started my walk from Inchon station towards the river (actually I started by going in the wrong direction). I ended up at a high way without any possibilities to cross, even if I tried to walk up and down some of the streets leading toward the river. I finally gave up, because I got hungry.
I’m still having trouble to get some food, because I don’t know what the different foods are which are offered by the shops and the supermarkets don’t really have food which is ready to eat right away. At last I just went to a take-away and ordered something random (xx-sun-dae, xx순대). I’m still not sure what it is, but it can best be described by a very thick sausage with the structure of minced meat and had a darkbrown color. It tasted okay, but it was very clear that it was meant as a snack.

After a short break I went out to my last destination, while the sun was setting. The World Cup Stadium is in the west of the city and just a few (3,25 km) away from the hostel. There was nothing special about the walk. I feel comfortable with the way the traffic works here and I just thought that I will never again have to worry about pollution on H.C. Andersen Boulevard in Copenhagen after being in Seoul for more than a day. Here you get all the dirty air you like 😉 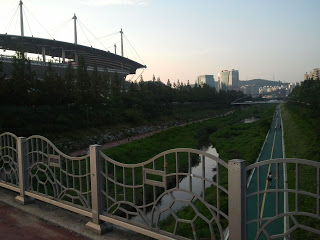 The World Cup Stadium and a bicycle-/running-highway