My second day in Seoul started with writing the blog for the first day and deciding where to go. I picked out an area in the west and the Seoul N Tower, the signature attraction of Seoul. The hostel owner recommended that I visited the tower by night to see the city from both it’s day and night side.

I hence started with the western area, where I picked “Mia” (a metro stop) as my destination. I had picked the area in a hope to get away from the tourist attractions and experience the normal life. My conclusion: The normal life is very…normal. People go to work, children go to school and they are returned by school bus.
The actual conclusion is: Korea has many mountains. It started when I got off the subway/metro: 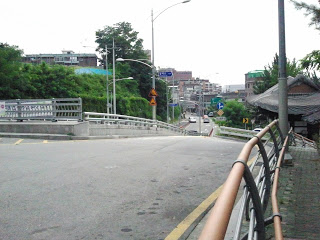 Where the hills get too steep to build anything on them, there is still forest and this: 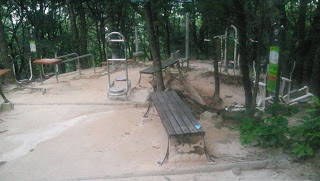 Training facilities! Every few hundred meters there is space to play basket, tennis, badminton, soccer or just do some exercises as above. After a short trip on a smaller hill I decided to go hiking in the mountain north of Seoul, only 1-2 km from my starting point. Not very far but far enough to try some other things. I made a short stop at the bank to get money for the hostel and when I came out the sirens went on and kept alarming and some officers where in the crossings and yield at the car drivers. But since everyone else kept quiet I decided that it must be of no relevance to me (maybe a test, which I then failed). In the meantime I went into one of the small local supermarkets and bought bananas and some water and then went into a Korean restaurant where I started by falling over the other guests’ shoes in a try to step into the room. Lucky for me, because you have to take of your shoes at the entry! I ordered bi-bim-bab (비빔밥) in Korean and got a full meal for 4.000 KRW (~20 DKK) with a bowl full of rice with an egg upon and a lot of dishes with different vegetables and of course also kimchi which you can mix into the rice. I just had to fight with my nose again and I had to wipe it with a serviette trying to make it look like I’m wiping my mouth. But the meal was very delicious.
I then started by hike. At first on tiny sand paths: 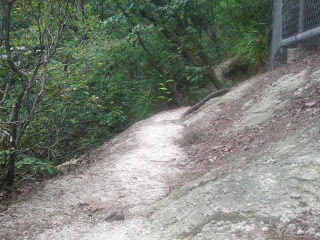 and then on stones: 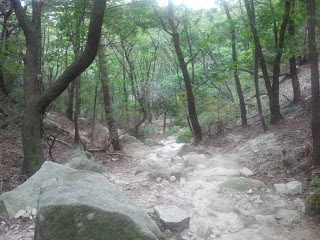 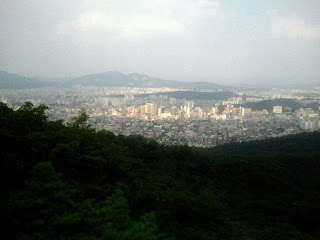 After the hike down and a few kilometers in the city I went back to the hostel to rest a little and wait for the sunset to come. Then the second part of my mountain hiking started to get up to the Seoul N Tower.

I don’t know where they come from, but there are by far more people in Seoul in the night then by day! Everybody was dressed for party.

After a lot of walking I ended up at the same station where I started but with the help of my map I finally arrived at the Namsang mountain and started the climb. The view over the city was again totally worth the walking (especially because the walking itself was fun). The Seoul N Tower is a major attraction both for tourists and couples and I decided to skip the tour on the platform, because the view from the top of the mountain already offered a beautiful night view of the city.

My conclusion after the second day: People are always in a hurry, the traffic rules are used only as a guideline and ignored when there is no reason to follow them (but in all the rule breaking there is a pattern: Take care of each other!), and finally: If you need some rest from the trouble, you mostly have to go home, because a public bench or a garden is just as far away as a public garbage bin…very far.

P.S. According to a rough measurement with Google Earth I walked between 25 and 30 km (about 10-15 km in the mountains)