Now it’s time to reverse my journey and leave the familiar surroundings of KAIST and spend the last ~11 days elsewhere in Korea.
Right now I’m reporting live from Daegu, a city southeast of Daejeon and exactly halfway between Daejeon and Busan, where I’m going next. But unfortunately I will visit Daejeon very soon (maybe tomorrow).
But let me start a bit earlier this week. Wednesday was the last day with activities at KAIST, where I had my last exam. For the evening I had invited my Big Data group for dinner to say goodbye in a nice way and also see how and what Koreans like to eat. They ordered and I watched and learned. An important thing to note is that everything is shared, so there are no individual orders for each person. In the middle of the table is a gas grill and all kind of dishes are placed around it. We had 3 rounds, the first with pork from the belly, the second pork from the ribs and finally a round with rice and noodles to remove the oily taste. It was a great experience and my group invited me! We ended the evening in a coffee shop at KAIST where we had a drink, before we separated.

The following days have been characterized by saying goodbye to all kind of people, which is a little sad. Yesterday I climbed the last time in the climbing gym with one of the other climbers I met at the climbing wall when I came there the first few times and also I had a nice talk with my buddy. My roommate did I already wish a nice second half in the morning on Saturday, because he left for Seoul for the weekend.

Today was then the day I had to leave (after exactly 4 months). I had to clear my desk and then I was ready to leave. 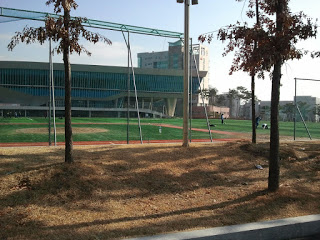 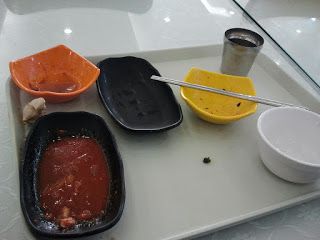 I had my last meal, went a last time over the campus and then I just had to get some money and would then be ready to go. And then the disaster hit!
I wanted to get money from my passbook, but instead of returning money, the ATM made rattling noises and showed an error, I asked a woman for help but she only pointed me to the telephone on the ATM. I tried, several times but the only thing I got to know was “Your call was delayed, please try again”. Luckily my credit card worked, such that I’m not lost, but I have to get it back in some way…
Unable to do anything I left the campus. A hard departure! Not emotionally, I knew that I would have to come back, but physically. Trunks are not made for large people, I always have to bow my back to be able to pull the two trunks which I try to manoeuvre. I went to the main street and stopped a taxi to bring me to the next subway station, about 1 km. He refused and drove away. Also the second taxi refused to take me the short way. Because I didn’t want to wait the 50 minutes for the KAIST shuttle, I started my journey to the subway station. When I came there I only needed a t-shirt and was still sweating. The rest of my trip to Daegu was surprisingly smooth except for the fact that two trunks are still hard to handle and stairs never seem to end.
I arrived at the hostel which I booked. You can look forward to the pictures which I will post tomorrow. One more reason to look forward to come back to my own room…
After a nice bibimbab (food) I’m ready to go to bed and either meet with someone tomorrow or go back to Daejeon to pick up my passbook (hopefully).

P.S. I heard the first Christmas song for this year today. I’m already sick of it. While they can be annoying after some time in Europe, there are at least a little variation. Here is only ONE Christmas song and only the refrain. Everywhere you go in the shopping street!