I’m getting close now to my departure to Daejong on Monday and get both excited and a little sad after spending so much time exploring Seoul.
Moving to a new city always contains building habits and knowing where you can get the stuff that you need for your everyday life. Today I found out where I can buy clothes, yesterday I found a restaurant nearby which offeres good Korean food, and the days before I explored other important places to be able to survive. Now I have to start over again on Monday.

On the other side am I looking forward to have a normal day and having tasks to do. After being on sightseeing in many parts of the city I’m running out of places which I would like to visit. Seoul is big, so there should still be enough to see, but it’s not as groundbreaking new as it has been the first days.
New things are mostly related to the people themselves now. I started my day in Gangnam, where I went up and down the different shopping streets: Plastic surgery, luxury cars and fashion. Everything far too expensive and surprisingly few people in the streets, maybe because of the heat which was not as wet as the days before but the sun was more aggressive on the skin. 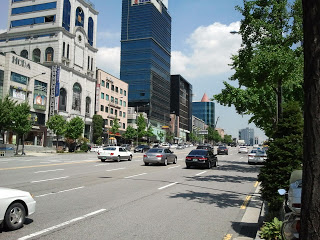 Anyway, on my way to Gangnam with the subway I experienced something which has really shaken my believe in the relation between people here. A drunk man walked down the train and when it stopped he fell and lay on the ground. I thought people would be very caring and help him but they actually just starred at him and walked past him. Finally one boy got down to him and asked him if he was okay but then also got off the train. After a while he got up and continued his walk through the train.

I left Gangnam quite fast because there wasn’t really that much to see, other than cars and expensive shops. Instead I went to the north side of the river again and went to the Seoul Forest which is a park with many recreational facilities (yes, still exploring the rest places). There were a lot of children and a lot of water and that always works good together. You cannot get more than wet: 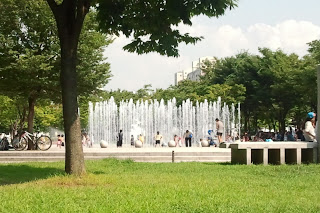 Because of the heat I am running out of shirts, as I noted yesterday. My solution is to buy new shirts as I had planned to do anyway. So I went shopping and bought two new shirts and a shorts.
The end of my day was very special. I met with another friend for dinner. This had almost gone wrong since we had chosen a subway exit as meeting point and it was the most crowded of the station as it turned out: 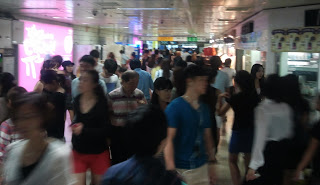 I waited for half an hour downstairs and hoped that she would notice me. After those 30 minutes I decided to take back to the dormitory to check my messages, because right now I have no way to communicate when I’m outside the hostel. And it turned out that she still waited for me, upstairs. We found a new place to meet and found a place to eat. It was a great evening :-)))