In connection with my birthday I got heart-warming feedback on this blog and I’m so sorry that I did not write updates for so long time. I hope you are all fine and enjoy the upcoming, traditionally busy, Christmas time.
When I wrote the last entry of this blog I didn’t expect the time until the next one to be that long. While the first half of this semester was very easy and no major assignments, the midterm exams came up and since then there was lots of work to do. All term projects started the week after the Midterm and that includes handing in a proposal paper or give a proposal presentation (or both) and new assignments were given which were quite time consuming. But yesterday we handed in the last assignment and now only one final exam and three term paper deadlines are coming up.

So what happened in the meantime. I have been planning to write about this for so long, since it was a big event on the campus: We had a big concert from different Korean stars on the campus. The concert was recorded for broadcasting by the biggest Korean broadcaster KBS. It was great to experience the concert, even though the music didn’t really fit my preference. The Koreans freaked out, every time a new artist presented his/her songs. A nice experience. 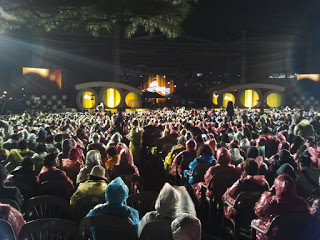 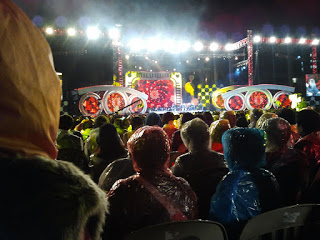 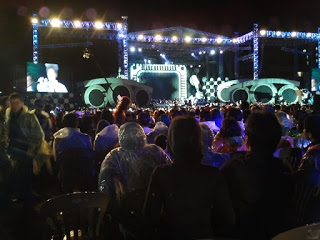 The week after the concert we had the midterm exams, so I think it was a nice break for the students from studying. And that says something, since it is hard to stop Korean students from studying. “Being busy” is a part of the identity of the students, even if they are not really busy. I feel that’s not very different from the Danish studying-culture, where I feel that people, including me, pity themselves far too often for “being soooo busy”. The Korean students take it to a new level, though. I can of course not be sure, but many of the Korean students that I’m in a group with seem to procrastinate quite a lot. The difference to the Danish culture may be that it’s acceptable in Denmark to say “I will take a break now and do something I enjoy and then work more concentrated and effective later” (and often stick to that plan), while it doesn’t seem to be socially acceptable to “take time off” for the Korean students. And so they often seem to end up falling asleep over some books in the library. Who knows how much better they could be by working more efficiently? My current conclusion on the difference between Danish and Korean students is, that Korean students are incredible at using existing knowledge to put it together to amazing technologies. On the other side Danish students often seem to lack the ability to use the existing knowledge efficiently and end up reinventing existing knowledge which means that these “reinventions” aren’t always a step forward. But this reinvention process fosters some new ideas. It’s like Danish students are good at inventing new LEGO bricks but lack the ability to use these bricks in the best way, while Korean students are really good at taking the existing bricks and build great things from them, but lack the ability to invent new bricks. In this way we can use each others strength to push forward.
While I have spent most of my time on studying the last few weeks, I have also spent a lot of time at the climbing wall. Since last week I go to KAISTs own climbing wall regularly. There even is a shuttle service to that wall. Despite of these great facilities, the wall don’t seem to be used by many, at least all the times I have been there I were completely alone for the 3-4 hours I normally stay at the climbing wall. Being alone there is great and boring at the same time. I like climbing with other people and especially “belay” for them, which means being the one on the ground securing the other climber. Also climbing is not something you can do for a longer period since your arms get really tired and hence you need a lot of rest. It is more fun to have others to talk to while resting. On the other side being alone at the wall means a lot of focus and lot of time to try different approaches to the routes. Climbing is a bit similar to solving a puzzle. While you can come some way by just being strong, you normally don’t get to the top. The trick is that the holds are easier or harder to grab, depending on the body position. Changing the body position can mean that a hold which was really hard in another position suddenly becomes a very comfortable place to stay at and rest. So climbing contains a lot of trial-and-error, testing different positions. I like spending hours and hours and just trying the same movements over and over again, trying to find new ways to approach it. I like being alone while doing that, because even if I try to not let it affect me that others are watching, it always has this social element of wanting to make it look easy and perfect. Trying to make these moves look easy constraints the way I approach the holds. When alone I can try the silly and stupid approaches without losing focus. Being afraid of making errors and look stupid is still the biggest enemy for getting better. I have realized and incorporated far too late in my life…(and in social situations I still disrespect that observation…) 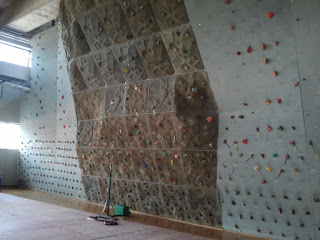 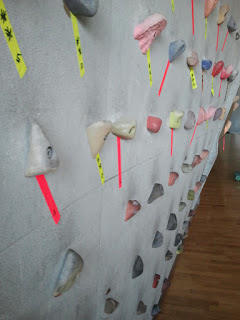 A last note on climbing. What I’m doing when climbing alone is actually not climbing vertical, but horizontally. The picture above shows some of the holds at the wall and you can see that they have coloured tapes attached. The tape marks the route and the holds you are allowed to use and in what order. The route setter at the Munji wall (at KAISTs Munji campus) must be a gigant, because sometimes the holds are 3 m separated. Sometimes using the edge of the wall does the trick but for most of the moves I don’t know how to do them. That the fun thing about bouldering (climbing 0-4m above the ground) , trying to find a way to do the impossible moves!

Have fun and thanks for reading

Posted in Blog
« We all use statistics
Modelling imagination – Part I »